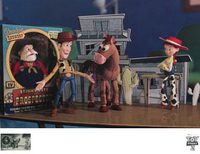 Toy Story 2 is a 1999 CGI family film, the third Disney/Pixar feature film, and the sequel to Toy Story, which features the adventures of a group of toys that come to life when humans are not around to see them. Like the first film, Toy Story 2 was produced by Pixar Animation Studios, directed by John Lasseter, Lee Unkrich and Ash Brannon, and released by Walt Disney Pictures and Buena Vista Distribution in the United States on November 19, 1999,[2] in some parts of Australia on December 2, 1999 and the United Kingdom on 11 February 2000. Toy Story 2 was re-released in a double feature with Toy Story in Disney Digital 3-D on October 2, 2009, and Toy Story 3 is scheduled for release on June 18, 2010.