Finding Nemo is an Academy Award-winning computer-animated film produced by Pixar Animation Studios and released to theaters by Walt Disney Pictures and Buena Vista Distribution. It was released in the United States/Canada on May 30, 2003, in Australia on August 27, 2003 and in the UK on 10 October 2003. The movie is the fifth Disney/Pixar feature film and the first to be released during the summer season. Finding Nemo set a record as the highest grossing opening weekend for an animated feature, making $70 million. It went on to gross more than $864.6 million worldwide, in the process becoming Pixar's most commercially successful film to date. Finding Nemo became the best selling DVD of all time, with 28 million copies sold. In 2005, Time magazine listed it as one of the top 100 films ever made.

Come Out and Play (Deluxe)

Come Out and Play (Premiere)(Chiarograph)

Dreaming of the Reef 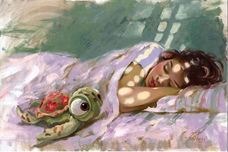 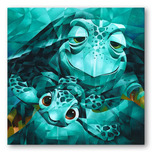