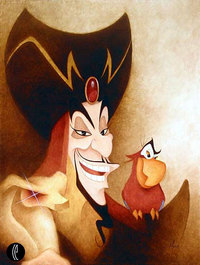 The thirty-first animated feature, "Alladin" in the Disney animated features canon, relates a version of the story of Aladdin and the magic lamp from The Book of One Thousand and One Nights. Several characters and plot elements are also based on the 1940 version of The Thief of Bagdad.

As is usual with Disney film adaptations, many aspects of the traditional story were changed for the moviefor instance, the setting is changed from a mythical Islamic "China" to a fictional Arabian city, Agrabah in Aladdin.

It was released at the peak stretch of the Disney renaissance era beginning with The Little Mermaid. Aladdin was the most successful film of 1992, with over $217 million in domestic revenues and over $504 million worldwide.

Remember every time you purchase Aladdin artwork over $995, shipping is FREE in the continental U.S. and there is NO SALES TAX when you purchase outside of Colorado. We SHIP WORLDWIDE and offer Layaway for Aladin art. 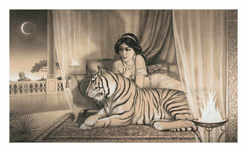 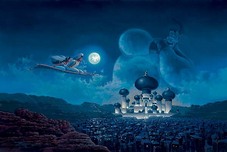 I Dream of Genie

Music Behind The Magic

The Arrival of Prince Ali