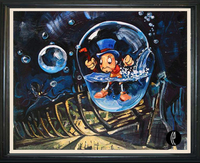 Jiminy Cricket is a fictional character who first appeared in the 1940 Walt Disney animated film Pinocchio. He was appointed by the Blue Fairy to serve as the official conscience for Pinocchio. He is also a comical and wise partner who accompanies Pinocchio on his adventures.The character was designed by Ward Kimball, who had been very disappointed and was about to leave the Disney studio when much of the work he did for Snow White was cut from the final version of that film. However, Walt Disney persuaded him to stay by giving him the assignment to design Jiminy. Jiminy Cricket's voice was originally performed by singer Cliff Edwards, who voiced the character for Disney through the 1960s. Jiminy's most famous song, as sung by Edwards, is When You Wish Upon a Star. After Edwards's death, Eddie Carroll replaced him as the voice actor for Jiminy. 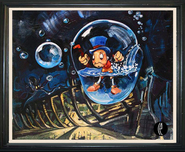