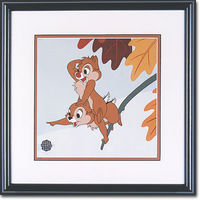 Chip 'n Dale are two animated chipmunks created by The Walt Disney Company. Their names are a pun based on the name "Chippendale" (see Thomas Chippendale). This was suggested by Bill "Tex" Henson, a story artist at the studio. Originally the two had the same colored noses, but as a way to tell them apart, Chip was given a black nose and Dale was given a red nose.

According to Disney, Chip is the logical schemer, and Dale is the misfit. An easy way to visually tell them apart is that Chip has a small black nose (it looks a bit like a chocolate "Chip" as a way to help people remember who is who) and two centered protruding teeth, whereas Dale has a big red nose and his two prominent buck teeth exposed. Chip is also depicted as having smooth, short fur atop his head while Dale's tends to be ruffled.