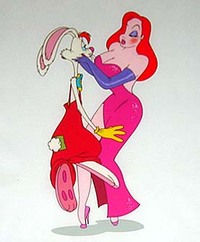 Who Framed Roger Rabbit is a 1988 film produced by Amblin Entertainment and The Walt Disney Company which blends traditional animation and live action. The film takes place in a fictionalized version of Los Angeles set in 1947, where animated characters, always referred to as Toons, are real beings who live and work alongside humans in the real world. It is often considered the movie that brought upon the modern age of animation in the United States. At $70 million, Roger Rabbit was one of the most expensive films to date at the time of its release. The film proved a sound investment, earning over $150 million during its original theatrical release. In addition, Who Framed Roger Rabbit won four Oscars at the 61st Academy Awards ceremony in 1989.

Diva in a Red Dress

We're in This Together