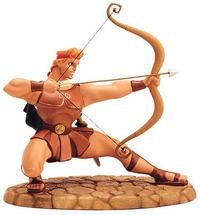 Hercules is a 1997 animated feature produced by Walt Disney Feature Animation and released by Walt Disney Pictures on June 14, 1997. The thirty-fifth animated feature in the Disney animated features canon, the film was directed by Ron Clements and John Musker. The movie depicts the adventures of Heracles (known in the movie by his Roman name, Hercules), the son of Zeus, in Greek mythology. The storyline also draws much of its inspiration from Superman, as well as The Karate Kid and Rocky.Though Hercules did not match its predecessors, it still took over $99 million in domestic revenues and over $252,700,000 worldwide. The movie was later followed by Hercules: the Animated Series, focusing on Hercules during his time at the Prometheus academy and Hercules: Zero to Hero, a direct-to-video movie.

We Had It With Your Discipline - Elton John (SN)