Song Of The South Artwork 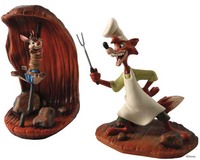 Song of the South is a feature film produced by Walt Disney, released on November 12, 1946 by RKO Radio Pictures and based on the Uncle Remus cycle of stories by Joel Chandler Harris. It was Walt Disney's first live-action film, though it also contains major segments of animation. The live actors provide a sentimental frame story, in which Uncle Remus relates the folk tales of the adventures of Br'er Rabbit and his friends. These anthropomorphic animal characters appear in animation. The film has never been released on home video in the USA because of content which Disney executives believe would be construed by some as being racially insensitive, and is thus subject to much rumor, although it does exist on home video in the UK. The hit song from the film was "Zip-a-Dee-Doo-Dah", which won the 1947 Academy Award for Best Song and is frequently used as part of Disney's montage themes.