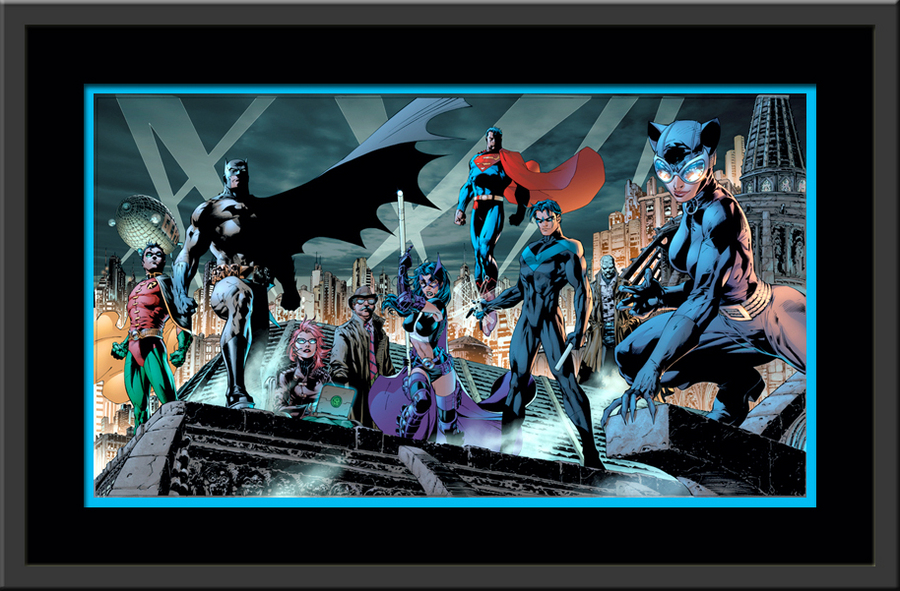 Taken from the renown series Batman: Hush, which premiered in 2001, "Heroes" is one of the two triple-gatefold comic book covers for Batman #619; the final edition of the Hush series. The final edition was published in November 2003. This cover art was penciled and colored by Jim Lee, and inked by Scott Williams. Batman #619 is the climax to the twelve-issue arc in which allies of Batman put themselves in mass against Gotham's most evil villains. Additionally, Hush, a new, powerful, yet strangely mysterious villain is introduced. Through the Hush series, the focus is to find out who Hush is. The Hush series is credited within the comic book industry as having the single largest impact on not just restoring Batman's position as a top DC Comics icon, but also reinvigorating interest in Jim Lee as a comic book artist superstar. Each print from the "Heroes" edition is hand-numbered and is signed by Jim Lee. This piece contains 9 character: Robin, Batman, Oracle, Commissioner James Gordon, Huntress, Superman, Nightwing, Hush & Catwoman.