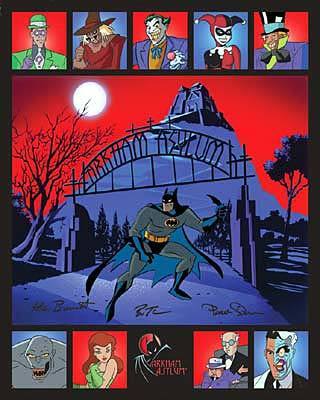 Each cel is hand numbered and signed by Alan Burnett, Paul Dini & Bruce Timm. The image for the Batman was drawn in-house by the artists at DC Comics. The background was conceptualized and painted by background artist Hector Martinez. Arkham Asylum is one of the most requested images from the animated series. Traditionally, Arkham Asylum is its own island prison on the outskirts of Gotham City. Accessed only by bridges, it incarcerates the Batman's most notorious villains. The Joker, also referred to as The Clown Prince of Crime, is Batman's oldest nemesis. Harley Quinn, also known as Harlene Quinzelle, was at one time a criminal psychologist who upon encountering the Joker, became enamored with his criminal mind. Now not only his accomplice, but his lover as well as stooge, Harley will do any of the Clown Prince's bidding, making her one of Batman's deadliest enemies. Jonathan Crane, alias, The Scarecrow, a one-time professor of psychology, is a terrorism expert whose efforts span from poisoning Gotham's water supply with fear agents to doping athletes for betting purposes. His ultimate goal is to destroy both Gotham and Batman. Harvey Dent, alias Two Face, was at one time a prominent Gotham City district attorney. But Dent also suffered a split personality, which while apprehending crime boss Rupert Thorne, came to light in a freak explosion to not just destroy half his face, but to now make his alternate personality his dominant personality. Pamela Lillian Isley was a distinguished botanist. However, things went too far for Pamela when she found her hyperactive immune system allowed her to reject any form of outside contaminant to her body. Thus, embarking on a life of crime, Pamela became Poison Ivy. A computer nerd who did well for himself, Edward Nygma was also a puzzler, whose life turned to crime, making him The Riddler. He uses a vast array of computers and electronics in his execution of various illegal acts throughout Gotham City. Jervis Tetch is where electronics genius meets an evil villain partly taken from Alice in Wonderland. As the Mad Hatter, his spurned affection for his secretary, Alice, leads him on a vengeful crime spree throughout Gotham City, using mind controlling microchips. Killer Croc is indeed more reptile than human, as is shown in his crocodile-like skin. Born in the Florida Everglades, he terrorizes Gotham with violent crimes, while also remaining one of Batman's most formidable enemies. Arnold Wesker seems like an unassuming gentle man until his alter ego takes root in him. That alter ego is Scarface, a ventriloquist puppet, who manages to control Wesker, making him known, simply, as The Ventriloquist. Together, even as Wesker attempts to fight off Scarface, the puppet puppeteers the master into a plethora of crimes throughout Gotham City.