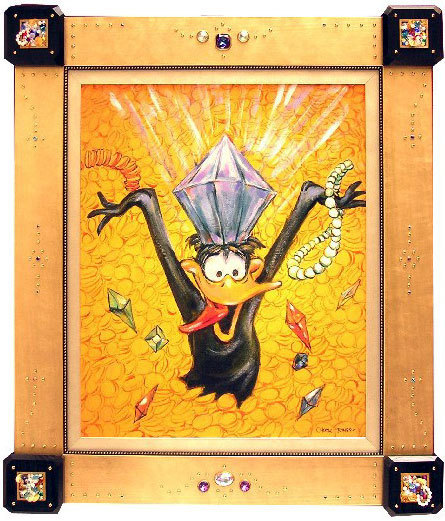 I'm in the Money

Daffy Duck doesn't just do rich; he does ‘comfortably well-off!' "I'm in the money", the latest limited edition giclée from the archives of the legendary animation character creator and director, Chuck Jones, depicts this despot of ducks drowning in ducats and buckets of lucre. Talk about bling bling. Daffy Duck doesn't want to share and says so. Reminiscing about his childhood once, Chuck Jones spoke about how we learn to be socially acceptable by telling the story of a birthday party given for his 6th or 7th year. A beautiful cake had been lovingly prepared by his mother and when he, presented with the cake and a knife with which to cut slices for the other celebrants, stated "I won't be needing the knife as I don't plan on sharing the cake with anyone," and was then quickly whisked away from the table and spent the rest of his birthday alone in his room contemplating the difference between what we really want and what is considered acceptable behavior in polite society. "It is never a struggle for [Daffy] to determine his priorities. Daffy does what we would like to do if we had the guts. Good comedy arises from the ability to bring to the surface, without shame, parts of yourself you would rather keep hidden. A character such as Daffy can act out things that you are not particularly interested in having anyone associate with you, but that you are perfectly willing to associate with someone you draw. He is so honest that it hurts. Underlying his avariciousness, sneakiness, and selfishness is an admirable will to survive." Chuck Jones, Chuck Reducks "I'm in the money" is a limited edition giclée on canvas and has been lovingly created from an original oil painting by Chuck Jones (pictured on page 146 of Chuck Reducks, Drawing from the Fun Side of Life.) The frame shown is a custom, hand made frame with pearl, fire opal, blue sapphire and other beautiful paste jewels, each of which is hand applied to create the framed image you see. With so much detail, please allow 3-5 weeks for delivery if you order this piece framed.