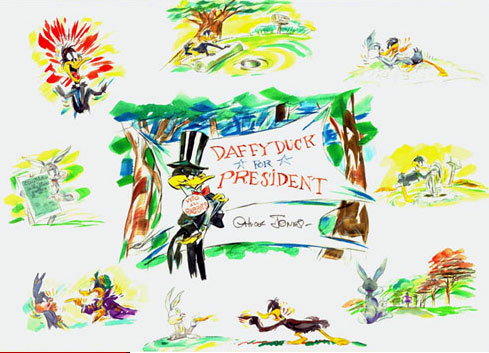 Daffy Duck has a vision: Rabbit Season, twelve months a year! And now, finally, after 60 years of haphazard scheming (some hap, mostly hazard), Daffy Duck has found a foolproof way to carry out his vision; become President of the United States, then declare year-round Rabbit Season. Perfect. Now, just one small issue -- how to become President. And, uh, how to get around that pesky little issue of the law. How does a duck get a law passed about rabbits, anyway? On the highway to power, Daffy encounters a roadblock at every turn. And Bugs Bunny is there to point out the billboards along the way. Daffy Duck for President becomes a battle of the wills, Looney Tunes style, guided by the wise and witty watercolor style of artist, author and (and Looney Tunes legend) Chuck Jones. Bugs guides Daffy through the three branches of American government -- the foundation of freedom -- in a style so breezy and comic that you'd never confuse it with a civics lesson. Or would you? It's pure Chuck Jones -- brash, witty and reflective -- in a bold flash of pencil, paper, and impulse. We've tried everybody else. Now let's try the last person you'd want as commander-in-chief. Daffy Duck for President! The time has come. Everybody duck! Chuck Jones' career at Warner Bros. Animation spans the entire history of the studio and most of the history of animation itself. His work has been celebrated by the movie industry, exhibited in galleries and museums, and inducted in the National Film Registry. He is a self-described "midwife" in the development of Bugs Bunny and Daffy Duck, and has pulled the Road Runner and Wile E. Coyote, Pepe Le Pew, and Michigan J. Frog directly from the hothouse of his imagination. In a career that has helped shape the humor of three generations, Chuck Jones has made over 300 films. Of these three have won Academy awards. He has been awarded with practically everything but the Purple Heart for his animation comedy, including a 1996 Honorary Oscar® from the Academy of Motion Picture Arts & Sciences and Honorary Lifetime membership from the Directors Guild of America. Daffy Duck for President is a project that has been close to Chuck's heart, a wry affirmation of the democratic process. * Daffy Duck for President is a giclée on paper limited to just 100 examples and created from Chuck Jones' original watercolors for his 1997 book of the same title. Released in 2004.

For more information on this piece, please contact the gallery at 303-333-1566 or email us at info@fascinationst.com.