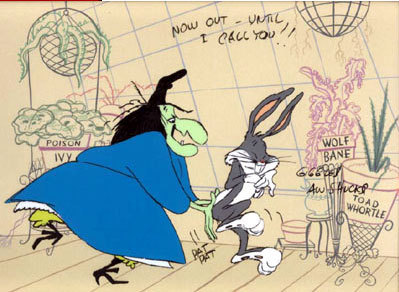 Bewitched Bunny 1954 A Golden Age Edition by Chuck Jones The Warner Bros. version of Witch Hazel (first voiced by Bea Benaderet and then in subsequent appearances, to much acclaim, by June Foray) bowed in theaters nationwide on July 24, 1954 in the Chuck Jones directed Bewitched Bunny. Borrowing liberally from the Brothers Grimm tale of Hansel and Gretel, Bewitched Bunny continues Jones' experimentation and innovation in character and scenic design. Using simple, yet elegant, lines to delineate the complexities of character through visual punnery (Hazel's head ends at the brim of her hat, who can forget those hairpins,) Jones confidently ups the madcap silliness quotient and verbal swordplay between Bugs and Witch Hazel*. His unit, composed of such stalwart talent as Mike Maltese, Lloyd Vaughan, Ken Harris, Ben Washam and the inimitable Maurice Noble, were equally up to the challenge of developing the stylistic and artistic re-imagining of the animated short film. Since the release of The Dover Boys in 1942, Jones had been noted, and often imitated, for his groundbreaking and imaginative use of shape, color and movement. "When I began thinking about the character of Witch Hazel, I first tried to imagine what the witches in Macbeth would look like, and I decided that they were big. Witches also have hats, and Hazel has hers. It is an odd one. I wanted the hat to be shapeless and insubstantial, looking as if it might explode in a cloud of dust at any moment...Her clothes cover her body completely, and I assume that she is the same shape as the outfit she is wearing. When she went out, she put on bloomers and high-heeled shoes, which I wanted to look like a drawing rather than a three-dimensional form." ---Chuck Jones in Chuck Reducks, Drawing From the Fun Side of Life Bewitched Bunny, created from an original Chuck Jones layout drawing for the film, is the first in a series of Golden Age Editions art from Chuck Jones that will celebrate, in limited edition and a variety of media, cartoons created by Jones during the 1950s. Estate signed in gold ink along with the hand signature of June Foray, this edition features a background created from an original used in the production of Bewitched Bunny. *Witch Hazel is the name of a North American shrub from which a medicinal brew and an alcohol-based rub is made.