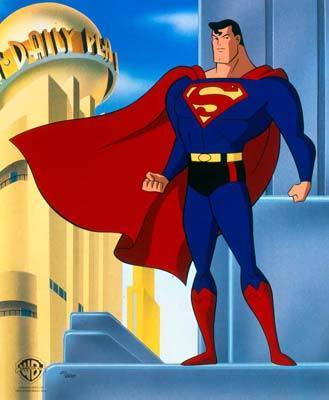 Publisher: Clampett Studio Collections Artist: DC Comics Characters: 1: Superman Release Date: November 14, 2003 Edition Size: 500 Image Size: 12 ˝ h x 10 ˝ w * Classic Superman was first released by the Warner Bros. Studio Stores in 2000. * The character of Superman was created in 1933 by Joel Shuster and Jerry Siegel. He first appeared in Action Comics #1 in 1938. * This image of Superman was adapted from the Superman cartoon series, and the Emmy Award-winning design created by series producer Bruce Timm. * As classic as The Man of Steel, he is not the first costumed superhero. That distinction belongs to The Phantom, who appeared months earlier in 1938. Superman, however, was the first hero with "super" powers. * Classic Superman is a hand-painted limited edition cel and background, sold in an edition of 500.