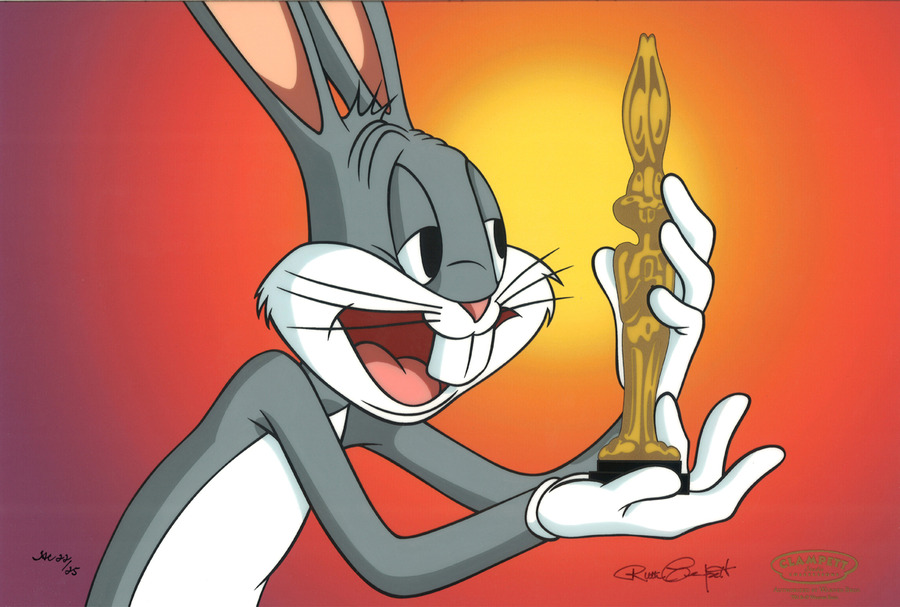 - Artist: Bob Clampett - Hand-Painted Limited Edition Deluxe Cel - Unframed Retail: $700.00 - Edition Size: 25 - Image Size: 10 x 12 - Item Number: CC1278 Yes, the rabbit finally get his due. He is now at the top of the Hollywood industry by winning an Academy Award for best actor. The thing is in this scene from "What's Cookin' Doc?" the 1944 classic Warner Bros cartoon directed by Robert Clampett, the best actor award isn't exactly an Oscar, but more a Bugs-Oscar. Still, any award is a good award for Bugs, as we all know he is the best actor...well, actor that's a rabbit...in all of Hollywood.

This image was taken from the original animation and was originally produced as a hand-painted limited edition in 1991. For the Ten Year Anniversary, this deluxe version of the cel was created which is larger and hand painted with intricate shading. The background is reproduced with the fine art giclee technique. The master inking is silk-screened onto acetate along with the Clampett Studio Collection seal of authenticity. Each cel is then expertly hand-painted on the reverse side in the classic animation style.

Each cel is hand-numbered and signed Ruth Clampett, Creative Director for Warner Bros. Fine Art Program for over 20 years and the daughter of the legendary animation director, Bob Clampett.