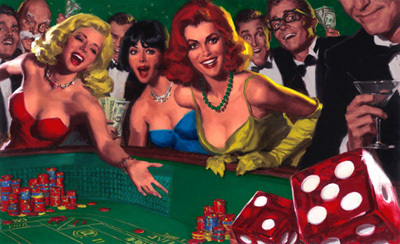 In Lady Luck, Glen Orbik captures the allure and excitement shared between three women during a ladies' night out at the "Craps" table. The image is energetic, almost frenetic, bringing to light the mystique of fortune and failure, and in this case, the beauty that can be seen in the Las Vegas casinos. Orbik's art instills memories of times gone by. From the clothes style of his characters to the inferences of danger, chance and fate, his themes have been said to depict qualities that are almost film noir in style. Glen Orbik's art has appeared in DC Comics publications such as "American Century," "Pulp Heroes," as well as in Superman, Batman and The Flash titles. His art has also been showcased in Marvel Comics, Image, as well as Universal and Sony, in addition to creating art for Star Wars and the "Dungeons and Dragons" series. Orbik has also rendered many book covers, including Ray Bradbury and Stephen King titles. This artwork measures 13 x 21.25 image size and the paper size is 17 x 25.25. Each print is hand signed by Glen Orbik.