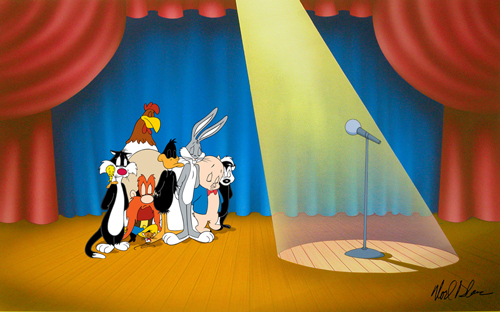 "Speechless: Deluxe" is a hand painted limited edition cel that follows upon the original Speechless lithograph, released in 1993. Both pieces are tributes to Mel Blanc, who passed away in 1989. Known as "The Man of A Thousand Voices," Mel Blanc is credited with giving many of the classic Warner Bros. Looney Tunes characters their personalities, including those of Bugs Bunny, Daffy Duck, Porky Pig, Sylvester, Tweety, Yosemite Sam and Foghorn Leghorn. "Speechless" first appeared in The Hollywood Reporter and Daily Variety in 1989. As the image of all nine characters with their heads bowed, and their eyes and mouths closed, remains the only captured artistic pose of its kind for the Looney Tunes characters, "Speechless" remains one of the most popular and widely known animation images within the animation art's genre. "Speechless" was originally rendered by animation director, Darryl Van Citters. For the 2005 release of the Speechless hand painted limited edition cel, the Giclee background has been painted by artist, Hector Martinez. Each in the edition is signed by Mel Blanc's son, Noel Blanc.
Each "Speechless: Deluxe" cel is accompanied by a brass plaque which reads:
Speechless Mel Blanc
1908 - 1989