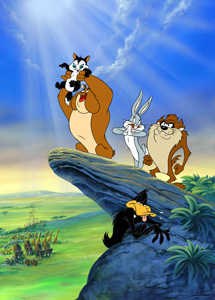 Spoofing "The Lion King," The Circus of Life is the second in a series of Clampett Studio original art pieces created to spoof Disney Animated films. The Circus of Life reenacts the early scene in "The Lion King," where Simba (played by Kitty) is hoisted above Rafiki's head, who is played Marc Antony. This piece harkens back to a Looney Tunes past, where Warner Bros. animation was known for mocking established movies, characters and world events. The Circus of Life relives the cartoon studio's well-known sarcasm; an irreverence that other cartoon studios of the time dared not attempt. The Circus of Life was drawn by Juan Ortiz, and hand-inked by Laurie Dindis. The original background was rendered by Hector Martinez.
More Artist Warner Brothers Limited Edition Hand-Painted Cel Lion King