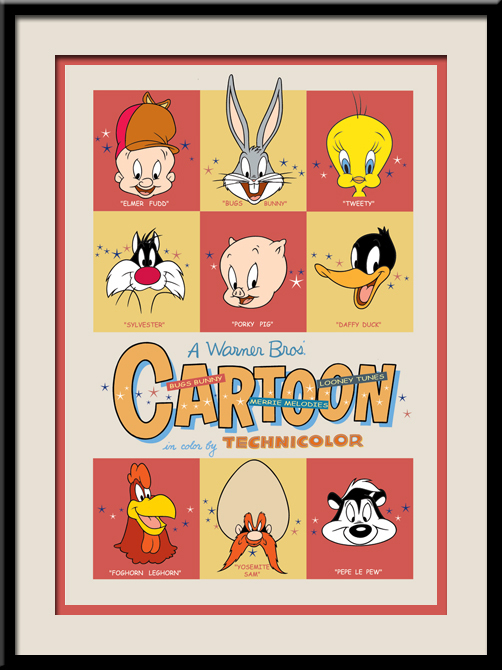 "Looney Tunes Stars" is the second installment from the Vintage Cartoon Series after "Bugs Director". The Vintage Cartoon series showcases the look, feel and style of classic Warner Bros. movie posters, produced in the 1930s through the 1960s. These pieces, as a series, can be obtained with matching edition numbers. "Looney Tunes Stars" shows a progression of the very first Looney Tunes stars, starting with Porky Pig and finishing with the latest Looney Tunes addition of Foghorn Leghorn. These movies posters were not produced inside Warner Bros., but were rendered by advertising companies contracted by the studio. While Looney Tunes denotes the cartoons at first distributed, then produced by Warner Bros., Merrie Melodies was another earlier division of cartoons made for Warner Bros. whose sole purpose was to design animation around compositions within the studio's musical library. The name "Looney Tunes" dates back to 1929, when it was derived as a parody to Disney's own cartoon series "Silly Symphonies".