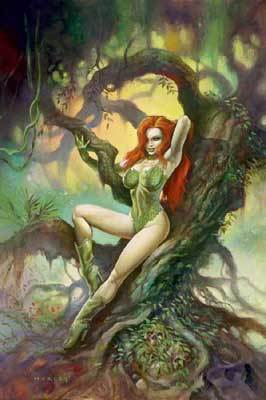 Publisher: Clampett Studio Collections Artist: DC Comics Characters: 1: Poison Ivy Release Date: April 13, 2004 Edition Size: 250 Image Size: 23 1/2" h x 15 1/2" w Item Number: CP 1289 * Rendered by renown fantasy artist, Alex Horley, Pretty Poison shows Poison Ivy in not just her naturally lush element, but an element she needs in order to survive the harsh Gotham City environment. * The suggestive pose given to Ivy is a trademark of Alex Horley, who is well known in the pinup genre. He worked for Marvel Italy, producing character designs for "The Mutant Chronicles," where he was discovered by DC Comics, and was signed on for several projects, including the highly anticipated Lobo Unbound. Horley has also been tapped to design product for the Harry Potter series as well as Magic The Gathering. Additionally, Horley has been commissioned by Rob Zombie to produce cover art for his new project "Creep Show," and has worked with Gene Simmons of the legendary band "KISS." * As do many of the female villains in Batman's world, Ivy also has "a thing" for the Caped Crusader, and usually attempts to lure him with her various plant-derived chemical constitutions. * Poison Ivy first appeared in Batman #181 in June 1966. She has since been a regular villain within Batman's domain. The edition is hand-numbered and is signed by Alex Horley.