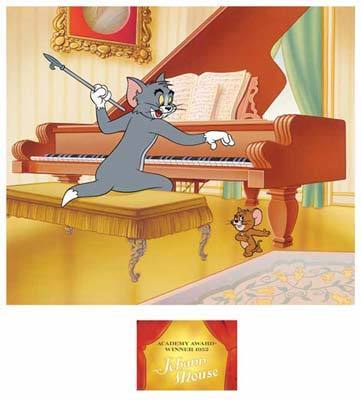 * Unusual for the typical Tom and Jerry themed cartoon, "Johann Mouse" takes place in Vienna, Austria, inside the house of Johann Strauss. Most Tom and Jerry cartoons place themselves inside a typical American suburban home.

* Equally unusual is the third character found within the short, which is music. The music motivates each cause and effect between Tom and Jerry. Similar to most cartoons, action in "Johann Mouse" takes place with musical accompaniment. But in this cartoon, it is also music which remains the main theme of the short.

* "Johann Mouse" is illustrated by Warner Bros. artist, Vince Musacchia, while the background was painted by Hector Martinez. The title card was designed by Chris Roberts. Each piece has been signed by Joe Barbera. As a tribute, the late Bill Hanna's signature has been silk-screened in gold onto the edition's acetate.