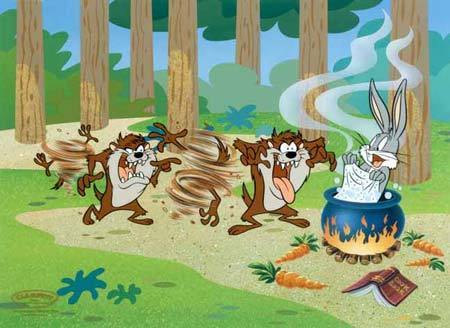 Released June 17, 2003. The Tasmanian Devil, or "Taz," is one of the most popular characters in the Looney Toons stable since his 1954 appearance in "Devil May Hare." Taz's typical pairing was with Bugs Bunny, though he did pair off with Daffy Duck in 1957's "Ducking The Devil." Created by Robert McKimson, the artist and director was fairly correct with his depiction of Taz. Like the real Tasmanian devil, McKimson's is stout, with a broad head and foul temper. The real devil, however, is nocturnal, a marsupial and does not move in a tornado fashion. Typically shy, the real Tasmanian devil is apt to aggression only when about to feed, which is not just another McKimson accuracy, but an ongoing occurrence to Bugs Bunny. Despite Taz's popularity, he has appeared in only six Looney Tunes cartoons, though he had his own series in the late 90s, called "TAZmania." This edition features multiple images of Taz in motion, created by classic animation hand-painted and dry-brush techniques.