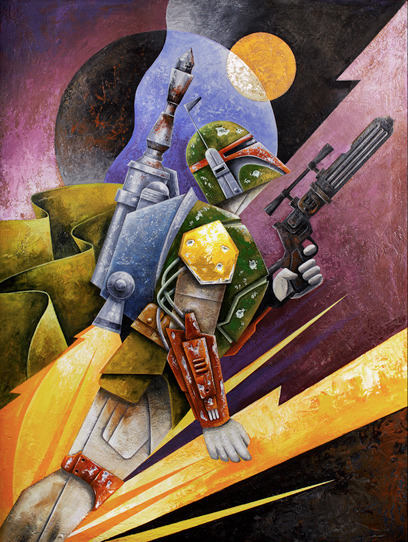 This artwork is from the Star Wars Visions book:
When Star Wars debuted in 1977, it revolutionized mainstream American filmmaking, transporting fans to new galaxies and introducing them to countless now-classic characters, aliens, planets, and starships. In the decades since, the Star Wars Saga has become a phenomenon impacting cultures across the globe.
Just as George Lucas drew upon the work of N. C. Wyeth and Norman Rockwell for his own visual inspiration, he has now invited more than 100 well-known and promising artists to draw upon the entire Star Wars galaxy for inspiration. Star Wars: Visions collects these magnificent artworks for the first time.Star Wars: Visions is a breakthrough tribute to the worldwide inspiration that is Star Wars.

Go back
More Artist Mike Kungl Limited Edition Giclee on Paper Star Wars
Do you have a question?
Visit our Brick and Mortar Gallery in Denver (Cherry Creek North), CO