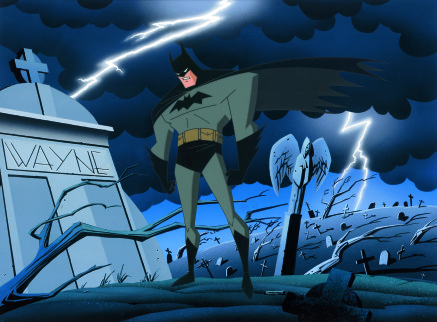 Inspired by an image created by DC Comics and Warner Bros. Animation. "...And Vengeance Begins" is signed by award-winning Batman producers Bruce Timm, Alan Burnett, Paul Dini, Glen Murakami and Eric Radomski. This is the first hand-painted limited edition cel signed by all five creators of The Warner Bros. Batman animated series. Juan Ortiz completed the original drawing and the background is a Giclee reproduction of a hand-painted original. The graveyard and Bruce Wayne's parents' graves, symbolizes to Batman the reason for his existence, as it was their deaths that spurned Bruce Wayne into becoming the Batman as a purveyor of justice.