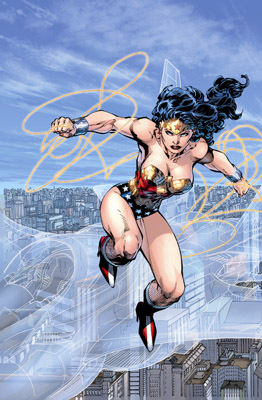 This is the cover art Jim Lee designed for the "Trinity" series. Wonder Woman (book #16), Superman (book #17) and Batman (book #18) each have their own cover, but the art was actually designed as a single image featuring the three Super Heroes in action. Superman, Batman and Wonder Woman lead the heroes of the DCU against the machinations of their malevolent counterparts, resulting in a cataclysmic event that will change the world - but not like anyone involved expects. This piece utilizes many of Lee's renown stylistic cues. Lee who at one time studied to be a physician at Princeton University, demonstrates his strong knowledge of the anatomy in order to create some of the most physically imposing superheroes to date, while his cross-cut style of illustration, executed through tiny lines in the character, gives an impression that his characters are actually moving. "Trinity: Wonder Woman" is produced as a fine art Giclee on paper, numbered in an edition of 250 paper and is hand-signed by Lee. It is the first release in a series of three; Superman and Batman will follow. In 2010 the canvas version featuring the three characters united, will be released.
17 x 11 (Image Size) 21 x 15 (Paper Size)