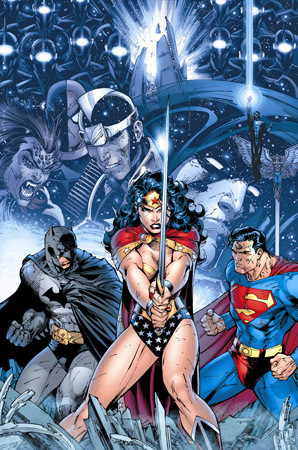 This is the cover art Jim Lee designed for "Infinite Crisis", the sequel to the epic "Crisis On Infinite Earths", the 2005-2006 seven issue miniseries event that rocked the entire DC Universe. In this story, a critical moment has divided Earth's three greatest heroes: Superman, Batman and Wonder Woman. It's the DCU's darkest days, and long-lost heroes from the past have returned to make things right in the Universe. This piece utilizes many of Lee's renown stylistic cues. Lee who at one time studied to be a physician at Princeton University, demonstrates his strong knowledge of the anatomy in order to create some of the most physically imposing superheroes to date, while his cross-cut style of illustration, executed through tiny lines in the character, gives an impression that his characters are actually moving.