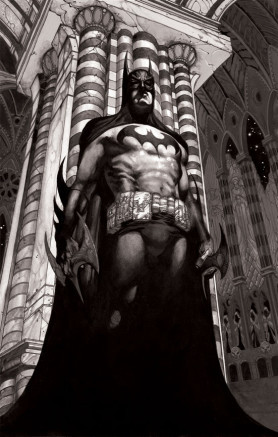 •This brooding downcast cover image of The Caped Crusader, was created by DC Comics cover artist Simone Bianchi. •The image is taken from eight-part Batman detective series, "Face to Face." A pivotal follow up to the "Infinite Crisis" series, "Face to Face" marks the return of Batman to Gotham where he must now solve a string of murders. •"Batman: Face to Face" illustrates Bianchi's dark, yet detail-oriented style. In this image of Batman, we readily observe the vigilante's tension as he readies himself to not just uncover the murderer's identity, but protect old foes as well. •Bianchi's obsession with all things gothic, particularly gothic churches inside Florence, Italy, lead to the darkly cold setting in which he has placed Batman, who Bianchi claims embodies the gothic period better than any other characters. •"Batman: Face to Face" is printed in an edition of 250, and is hand signed by Simone Bianchi.