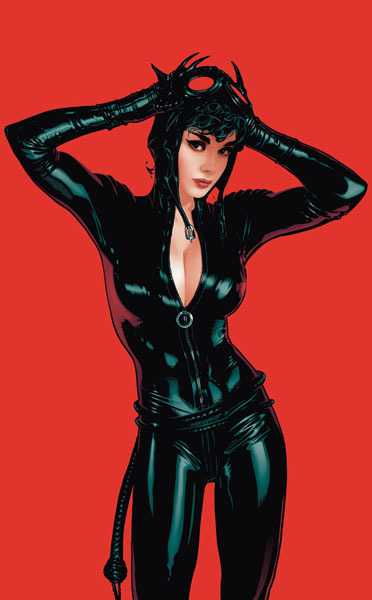 •"Meow!" featuring Catwoman was rendered and designed by revered DC Comics artist, Adam Hughes. Hughes, known for his "good girl" approach to DC Comics heroines and villainesses has earned him respect beyond comic book pages and into mainstream art. •Adam Hughes describes his rendering of Catwoman as "naturalistic." This technique makes Hughes' characters more approachable then the muscular portrayals rendered by other artist. In particular, Hughes' female characters arrive to the viewer with a mixture of strength, innocence and believability. •Catwoman's debut was in 1940 in Batman #1, where she appeared as Selina Kyle, Catwoman is ranked 51 on Wizard Magazine's "100 Greatest Villains of All times" •Created by Bill Finger and Bob Kane, Catwoman has transformed from her initial role as a whip-carrying high-stakes thief to a dark anti heroic character. •"Meow!" is printed in an edition of 250, and is hand signed by Adam Hughes.