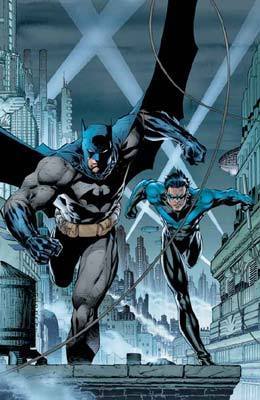 by Artist Jim Lee "Gotham's Crime Fighters" encapsulates the reunion of Batman and the original Robin, Dick Grayson, who first appeared as Robin in Detective Comics #40. This image of Nightwing illustrated by Jim Lee, is taken from Batman #615 (December 2003); #8 in the Hush series. Despite their long-standing relationship as a superhero team, much friction has brewed between Batman and his young co-star, which is why Robin/Nightwing left the caped crusader. Robin went on to form the Teen Titans, then, sometime afterward, became the soul defender of Blüdhaven, a disenfranchised city that borders Gotham City. At that time, Robin took on the new identity of Nightwing. Not until Batman suffered a near-devastating injury at the hands of Bane, did ,Nightwing go into action to team up with Batman.