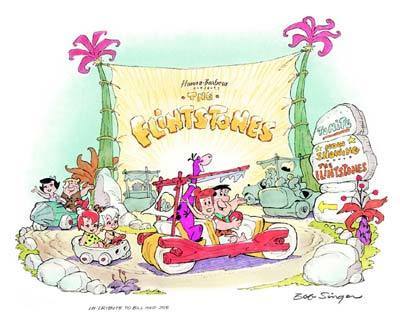 Drawn by longtime Hanna-Barbera artist Bob Singer, Hanna-Barbera Presents The Flintstones is inspired as a tribute to legendary animation producers Bill Hanna and Joe Barbera. The drive-in movie scene Singer depicts is reminiscent of the original ending of The Flintstones where as the family parks at the drive-in, Dino sticks his head through the car's canvas top. Each print in the edition of 250 of "Hanna-Barbera Presents The Flintstones," is detailed by a remarque by Bob Singer, which depicts the likenesses of Bill Hanna and Joe Barbera at the bottom of the print. This release is signed by Bob Singer. Fred & Wilma Flintstone, Dino, Pebbles, Bam-Bam, Barney & Betty Rubble