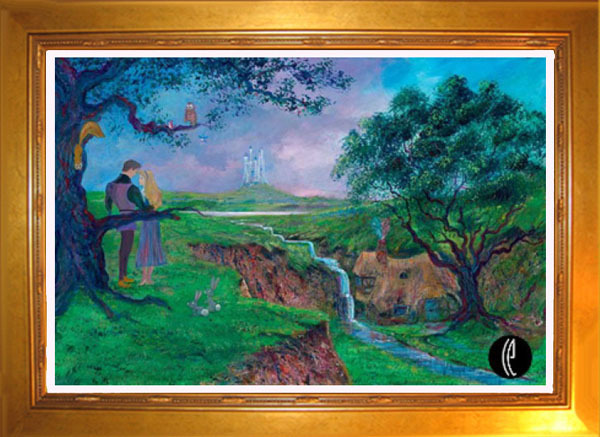 Introducing the Collaborative Art of Peter and Harrison Ellenshaw. As a visual effects designer and filmmaker, Harrison Ellenshaw's work can be seen in such films as TRON, THE EMPIRE STRIKES BACK, CAPTAIN EO, DICK TRACY, and many others. He has also had a successful career as an artist with one-man shows of his paintings in London, New York, and San Francisco. Peter Ellenshaw has received five Academy Award® nominations, winning the Oscar® for his stunning recreation of Edwardian London in the Walt Disney's classic, Mary Poppins. Throughout the years, Ellenshaw has sought to capture the drama and emotions of many different scenes. His work is represented in both public and private collections worldwide. He has received numerous honors and retrospectives including those by the American Film Institute, the Museum of Modern Art in New York, the Film Institute of Chicago, the Academy of Motion Picture Arts and Sciences, the R.W. Norton Art Museum in Shreveport, Louisiana and has been bestowed the illustrious title of "Disney Legend." "Once Upon a Dream " 16 x 24 limited edition giclee on canvas. A giclee (pronounced zhee-CLAY) is an individually produced, limited edition, high quality reproduction done on a special large format printer. Images are generated from high-resolution digital scans and printed with archival quality inks. Giclee prints can be printed on a number of different media - watercolors can be reproduced on watercolor paper, for instance, and can be so color-true that they are virtually indistinguishable from the original. Oil paintings can be reproduced on canvas. The giclee printing process provides better color accuracy than any other means of reproduction. The colors are brighter, last longer, and are so high-resolution that they are virtually continuous in tone, rather than tiny dots.