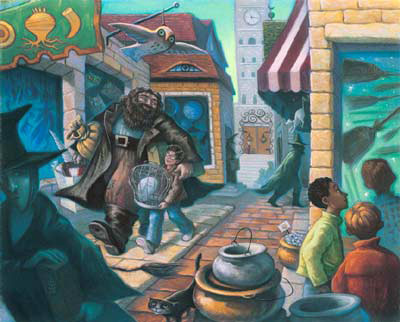 by Mary GrandPre Taken from the first Harry Potter book, "Harry Potter and The Sorcerer's Stone," Harry and Hagrid make their way through Diagon Alley, which is Harry's first exposure with the magic world. This portrayal shows Harry and Hagrid leaving Eyelops Owl Emporium. Harry holds Hagrid's birthday present to him, which is a beautiful female Snowy Owl, later dubbed 'Hedwig' The illustrations of renown artist Mary GrandPré have appeared in each of the Harry Potter series. Her work has also appeared in Time and The Atlantic Monthly. Additionally, her talent for environment/scenery has been used for Dreamworks on the production of Antz.
More Artist Mary GrandPre Limited Edition Giclee on Paper Harry Potter