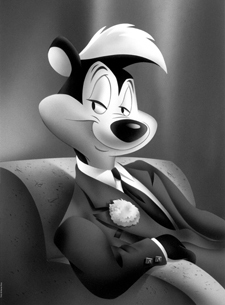 This art was developed in 1993 by award-winning Warner Bros. artists Alan Bodner and Harry Sabin. The images were originally released as fine art lithographs, and upon completion, featured a total of six classic Looney Tunes characters. Rendered in classic black and white tones, The Pepe Le Pew and Tweety & Sylvester Portrait Series illuminates these three characters in the same dramatic and stylized poses used in the 1930s and 40s, when screen actors were as well known for their photographic glamour as for their on-camera ability. The Pepe Le Pew and Tweety & Sylvester Portrait Series Giclees on canvas are the third and fourth in a series. The first two featured Bugs Bunny and Daffy Duck, and the fifth featured Elmer Fudd. Edition numbers 1 - 50 will be reserved for matched sets. Each canvas is hand-signed by the artists.
More Artist Warner Brothers Limited Edition Giclee on Canvas Pepe Le Pew