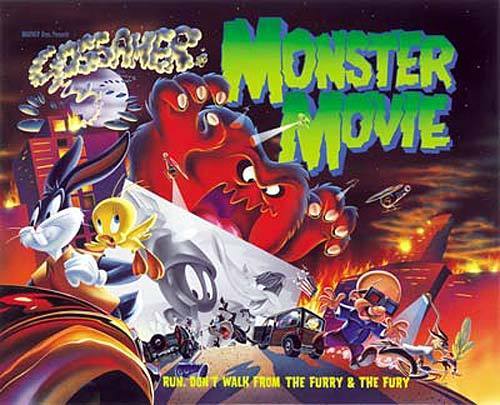 Designed and illustrated by artist Paul McEvoy, who has created storyboards for animated series such as The Grim Adventures of Billy and Mandy. The painting was rendered by Hector Martinez who is a major Warner Bros. Gallery artist. Harkening back to the B-horror movie posters of the 1950s, Monster of a Star seeks to parody that genre using Gossamer as the evil monster who rises above the screen, scaring viewers within a drive-in movie theater. This piece is a companion to Invaders from Mars!, designed and rendered by Juan Ortiz, a piece which also spoofs the 1950s B-horror movie posters. Adding a combination of timely realism and parody to Monster of a Star, the frightened Looney Tunes characters are dressed in period clothing and are shown with automobiles from that era. The mass "running" hysteria also parodies the B-horror movies of the 50s, as it seems each film from that period had a running crowd scene. With a total of 11 characters, this is sure to put a smile on your face and of those who see this incredible image. The characters are Gossamer, Bugs Bunny, Tweety, Sylvester, Marvin Martian, Tasmanian Devil, Daffy Duck, Eggbert, Elmer Fudd, Wile E. Coyote and Road Runner.
More Artist Warner Brothers Limited Edition Giclee on Paper Looney Tunes