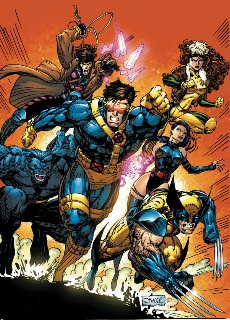 Jim Lee is one of the premier Comic artists. His distinct style involves cross-hatching, which creates a larger-than-life representation of his characters. Lee's Un Canny X-Men is still to date the best selling comic in history. Lee, who studied psychology at Princeton and intended to go into medicine, rekindled his love for art and drawing while taking a fine art class as an undergraduate. In high school, Lee was touted as the most likely to one day own a comic book company. In fact, after Lee's rise to fame with Marvel comics, he and seven animators broke away from the company to start Image Comics. Lee's division within this new company was Wildstorm Productions, which produced his personal title "Wildcats." Wolverine, Cyclops, Gambit, Psylocke, Rogue, The Beast
More Artist Marvel Comics Limited Edition Giclee on Canvas None