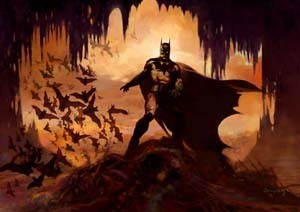 Also available in a limited edition giclee on canvas, signed by Arthur Suydam. The edition is made up of 100 pieces and retails for $675 unframed.

An honored recipient of a Spectrum 2005 Gold Medal for artistic excellence, Suydam has contributed to multitudes of images to Batman and other DC Comics, as well as Marvel Comics. The Suydam image depicts the intimidation and darkness Batman instills as he walks into the shadowy existence of his Batcave. Suydam's imagery suggests a gothic stylization along with the surreal, bringing a completely different, almost haunted allure to his superhero subjects. All prints in the Domain of The Bat edition are signed by Arthur Suydam.
More Artist DC Comics Limited Edition Giclee on Paper Batman